I remember reading about the 16th street church bombing, in school it was just another footnote in history, at home, I pondered for hours how and why this was allowed to happen. Four little girls, Addie Mae Collins, Carole Robertson, Cynthia Wesley aged fourteen and Denise McNair eleven were victims of a terrorist attack by the Klu Klux Klan on September 15, 1963. Twenty-two additional people were also injured that day after Robert Chambliss placed a bomb under the church steps. This act of violence and the many more that followed was the result of a campaign by civil rights opponents to stop integration of public schools. George Wallace, the Governor of Alabama, said a week before the attacks that in order to stop integration Alabama needed a “few first class funerals”. Due to this, many feel that he was also to blame for this attack. Source 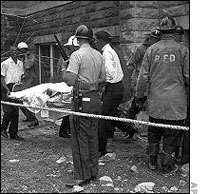 On October 8, 1963, Chambliss was found not guilty of the murders, the verdict was not an uncommon outcome when victims were of African American descent and the perpetrators were white. However, fourteen years later in November 1977, Robert Chambliss was found guilty and sentenced to life in prison. He lived out the rest of his short life in prison and died on October 29, 1985. It would be over two decades later that the accomplices Herman Cash, Thomas Blanton and Bobby Cherry were indicted for their part in the terror attack by the FBI. In May 2002, Cherry was convicted of murder and sentenced to life in prison. Cash had already died by the time the indictment came down and Cherry’s trial was indefinitely postponed because he was considered mentally unstable. Source

“Mississippi Goddam” Sung by Nina Simone
This song was inspired by the murder of the four little girls in Alabama.
The anniversary of the bombing comes at a time when the integration of our schools have come to a grinding halt and in fact reversed momentum. “According to recent research from the Harvard Civil Rights Project, the number of so-called “apartheid schools” – those that are 90% or more students of color – is large and growing, with more than one in six black children and one in ten Latino children attending such schools. Often concentrated in urban areas with middle-class, majority-white suburbs nearby, students of color are frequently isolated not only by race, but poverty.” As we reflect on the anniversary of this terrible tragedy, we should do well to renew a committed agenda to accomplishing true integration of public schools and demand better quality teachers no matter how “economically depressed” an area maybe. For too long this issue has been swept under the rug while our children continue to be deprived of valuable social interactions with students of other races. “In our ever-more diverse nation, the ability to interact with and learn from people from different backgrounds is a critical component of every child’s education.” We can no longer allow so many brown students to languish in our educational system. Source
In addition to the integration issue, the renewal in racism guided through an islamophobic lens is also a cause for concern on the anniversary of the Birmingham four. As we witness an uptick in the vandalization of mosque’s across the country we have to call upon the past for guidance. We know what can happen if this sort of fever-pitched scapegoating of Muslims is allowed to go unabated. People die and sometimes it is the most innocent among us, the children, in who our future lies. Source
Sometimes history repeats itself despite the learned lessons from times past but we must do all that is possible to keep it from doing so. The fight for integration came at such a heavy price and unfortunately, it is still a dream deferred. In addition, racially motivated attacks and vandalism are also on the rise for members of the muslim community and for the African Americans included in that demographic, it is an all too familiar sight. Today, we reflect on those four beautiful souls who were taken from us all too soon due to the hatred of a few. We must vow to never allow this to happen again and we must continue the fight for integration of our public schools. I leave you with this quote:
“May Men Learn To Replace Bitterness And Violence With Love And Understanding”

For more on the Birmingham Four:
“Four Little Girls” a documentary by Spike Lee
“Until Justice Rolls Down: The Birmingham Church Bombing Case” by Frank Sikora
“http://www.4littlegirls.com/index.htm”
More on the state of our public school system:
“The Shame of the Nation: The Restoration of Apartheid Schooling in America”by Jonathan Kozol
On History