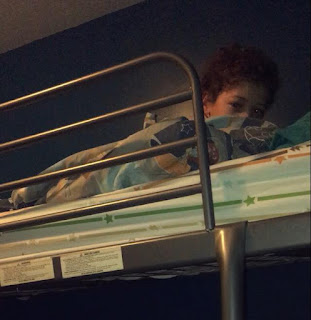 I had decided I was going to ignore talking about Trump to my kids as the election grew closer. I don’t know what I wanted to accomplish, by doing that, I guess I was thinking don’t feed the troll.

Throughout the early months of the election I would chortle and laugh every time he came onto my screen. I never thought Americans in 2017 would be dumb enough to vote for someone so utterly ignorant, arrogant, and outright racist. However, as time wore on,  I felt this joke was actually becoming very unfunny and likely would end with what we have today.
In hindsight, it was a bad idea not discussing this with my children since they’re school age. Social media, smartphones, and a vicious 24 hour news cycle meant that it would get back to them some how.

Yet I continued on in bliss until one day, my son and daughter came home from school one day upset and looking for answers.
My son, Salahudeen, pleadingly looked at me with his big brown innocent eyes and said, "Mommy, my friend Hassan said that Donald Trump doesn't want the Muslims in America and he's going to kick us out."
As those words rushed from him, my heart began to sink. No matter how much you hope you can protect your child, the world has a funny way of undermining it.
So there I was, having to sit them both down to have a conversation I never had the privilege of ignoring in the first place.

"Well, he said he wants to ban all Muslims from entering the United States but it's unconstitutional. The constitution gives us our laws and everyone must adhere to it. We'll be fine, plus I don't think he'll get elected."
That seemed to be fine for them. They were okay and I was able to avoid talking about him with the children...until November 8, 2016. After sensing the way the votes were going, I decided to go to bed early and not wait for the results. When I woke, I immediately looked at the news via my cell phone and say what I suspected was happening last night, a Trump win. Knowing that I didn't want the kids to find out in school, I made the choice to talk to them before leaving for work.
The girls were sleeping but Salah was awake. I came into his room and looked up into his groggy face.
"What mommy? What's wrong?"
Finding his eyes I searched them for strength to continue because he's my most sensitive child and I knew this wouldn't go over well.
"Salah, Trump won."
He sat up a little in his bed. His sleep swollen eyes widened as what I said registered. Immediately the whites of them grew red and welled with tears.
"Wait...what? How? How could anybody vote for him mommy. He said a lot of mean things. Why would they vote for him?"
Unsure of what to say, I said the only thing I could, "I don't know."

Then I found my voice, "Son, there were a lot of working class people angry with the Clintons over NAFTA and many of them also felt neglected by Hillary (yes I talk to my kids like adults. Always have). Of course it was also many racists who voted for him just because they hate the people he's said mean things about too. This country has always been complicated and we don’t always do what’s best for all the people in it. All I know is, we'll be okay."
Salah sat up, fear creeping into his eyes as if remembering something important. "Mommy, Trump said he didn't want Muslims coming into the country. Is he going to kick us out? Are they going to come for us now?"
Realizing there's nothing normal about what my son just said, I tried to fight back tears. I never wanted my kids to feel unsafe or insecure. Our home is suppose to be a safe space for them. Yet here he was asking if we were safe. In my mind I'm thinking, this is ludicrous. What Donald suggested is utter ridiculousness. There's no way it could happen. No way he would ban all Muslims from entering the country!
Then my mind thought of the internment camps for Japanese Americans. I thought of Hitler and the genocide of the Jewish people. It's not likely, but can it happen? History says it can because it did.
So what should I say. Deciding not to panic and make him feel totally vulnerable, I did the only thing I knew how to do to protect him. I lied.
In a firm voice I said, "Salah, I will protect you. Nobody's coming for us. We'll be just fine. You have nothing to worry about. I will keep you safe!"
Hoping that was enough, I climbed the ladder to his bed and gave him the warmest, tightest hug while whispering my love for him in his ear.
Running low on time, I left the still sleeping girls to Matt and rushed to pack my lunch.As I gathered my things to leave Salah came down the steps and found me in the kitchen.
"Mommy, when is the army coming?" He asked. "I know they're going to take us away."
He said it so matter of factly as if he knew the full story of America’s bloody and vassaled past though I’d only given him pieces of the horror that was our beginning.
I stopped, turned his face to mine and looked him in his eyes, "Son, nobody's coming. We're okay. You are fine. We are fine. This is your home. We aren’t leaving."
As if he could sense how tenuous my affirmations were, he headed for the stairs and said, "It's okay if they come knocking on our door. I'm not going to let them in. I'll start a rebellion."
That was his way of coping. He could no longer afford to be an optimist...and neither could I. With that, he disappeared up the stairs and I had to pull myself together and repeat this same conversation, in a more nuanced, complex, and balanced manner to 144 other ninth grade students.

I never thought I’d have to help children navigate through a Donald Trump presidency. May his tenure be brief with a minimal amount of damage to our lives and the lives of those whom he despises.