Food is Life, Cake is Life, and Exercising Sucks. 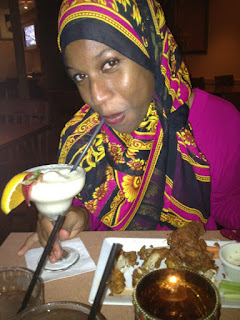 This statement sums up my feelings since I came into this world. Those who know me are probably scratching their head right now trying to figure out how this could possibly be true. Yes, I ran track or danced for most of my childhood and into my teens. Here's the thing, I loved running track, especially cross country. There's something about running through the elements while listening to music or meditating in my head that has always resonated with me. However, even though I was an athlete, I hated to train because I hate exercising. Seriously, I probably could have been even better than I was if I had the passion and dedication that it takes to be elite and exercise hard. Sadly, I did not and as a result, here I am at 30 pissed off that "cake is life" can no longer be my mantra.


I've always had a pretty good metabolism and an athletic body. My calf and upper arm muscles have give the false impression that I was more in shape than I was/am. As a teen, I didn't have to do much to be thin and this continued into my early adulthood. Yet, twenty-one is a different beast than twelve and after having a baby, I quickly learned that not everybody has the snap back potential. This may be surprising to many folks considering how quickly most celebrities get their pre-baby bodies back. Honestly, some of this can be associated with genetics and being fit during pregnancy, but some of this snap back phenomenon is a result of being rich (hey plastic surgery...we see you).

Since I'm neither rich...nor have the snap back gene, as I'm pushing 33, some changes have to be made. After my last child I dropped down to 118lbs due to his voracious eating habits. I had to literally eat every unhealthy thing imaginable including fried chicken which I usually shy away from and chicken smothered with gravy in order to keep my weight at a healthy level (me at 118 was scary). Since finishing with nursing...and being allergic to exercising, I've now ballooned to a overly healthy 152lbs. That's 22lbs away from my ideal weight and the scale continues to climb. It's more than time that I took action.

In talking to friends, I realize that I need to be clear that this is not about me not wanting to be fat and has everything to do with my optimum health. I can't chase after my kids if I'm not healthy. I can't be the best teacher I can be if I can't stand for long periods of time due to my lack of fitness. It's also about not adding to the obesity epidemic that plagues my intersecting communities more than others. Black women are much more likely to be obese and deal with health complications as a result of that. These findings are also the same among Muslim women due to so many being discouraged from exercising by fathers, husbands, and brothers who don't want them being seen working out. In some men's head, exercising in public means you're somehow being immodest. As if that wasn't enough, women also tend to disproportionately eat emotionally when they're stressed out and studies show that some women deal with higher levels of stress than others.  Being a busy Black Muslim woman and mother, the cards are already stacked against me. I owe it to myself and my children to play them right and beat the odds.

So...I'm going back to what I know best, running. Yes, the very thing I couldn't be bothered to do unless I was actually in a race or being forced to by my coach or parental figure (by the way, Mr. Johnson was the best coach ever). After day two of jogging through my neighborhood, I realize that not only am I attempting to help myself, I am also helping others. The thumbs up and smiles that I get from my neighbors are reassuring. So is the friendly trash man as he clears the path for me to run by and yells good job. Yet, this response also indicates it's not the norm here and I certainly don't see too many jogging by my own door. Understanding this, I also serve as hopefully an example to those who also feel "cake is life and exercising sucks" to get fit by any means necessary. Whenever I lack motivation in the weeks to come, I'll remember this.

Running undoubtedly will become harder to do once school starts in a few weeks. It will require dedication and a willingness to change my schedule to accommodate a more fit lifestyle. I also have to be very strategic when I do it because unlike most people, exercising does not make me feel energized. Picking a time of day to run so I won't be exhausted afterward is important for me, that's why an early morning run when I have large stores of energy may be ideal. Thankfully, I'll have a few weeks to figure out what works well for my body.

In the meantime, I also plan to make some dietary changes. It's not that I'm a horrible eater, I mean we shop at Trader Joe's every week. However, I can stand to cut back on the sugar and reduce my families consumption of so much meat. This means even more greens, more smoothies, and also saying no to cake.

Okay, cake is still life...so I'll just say no to the second piece of cake and add an extra minute or two of jogging.