Girls Trips Are Life: My Time in Wilmington, N.C. 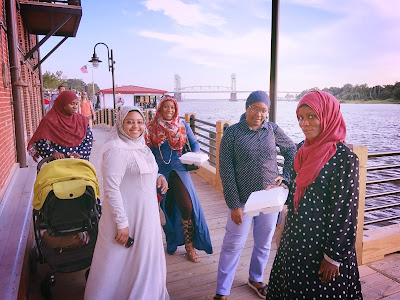 I think I may very well be one of the few women left in America that hasn’t see Girl’s Trip! Now before all of you ladies come with your pitchforks OR spoilers...simmer down. My friends and I will be making a night of it on Saturday! Yes I’m late but in my defense, I literally just lived a Girl’s Trip of my own a few weeks ago and was in no rush to see one on the big screen.

Before I get into our trip, let me backtrack. In college I was a social butterfly. I mean, I had tons of friends from all different backgrounds. I was in the MSA so I was exposed to so many different cultures and wanted to soak that up as much as possible. My bubbly personality actually gained me access into these circles and served as a buffer to the clear exclusion that my other Black Muslim friends faced (more on that in another post). As a result, I did find that my time and friends were split along racial/culture lines and that I tended to gravitate more towards my non-Black friends.

Fast forward some nine years later and the tables have turned. Most (not all) of the “multicultural friends” I had in college have long gone...back to their respective and in some cases non-Black Muslim communities. The friends that I’m still in contact with from my Temple days are mostly from the Afro-Diaspora and I only say this because it’s something that I didn’t imagine would happen. The mere fact that we even keep in touch despite being spread out all over the east coast is a testament to modern technology, the institution of marriage and a willingness on Aqeelah and Leslie’s part to ensure that a group chat is popping every couple of weeks.

It was one such group chat that developed into our girls trip to Wilmington, North Carolina. Aqeelah proposed we get together some time in the summer and started soliciting available dates from all of us. This wouldn’t be easy as we’re all married and have about 13 kids between the 7 of us (Muslims have lots of kids...lots...we take the be fruitful and multiply commandment to a whole new level). We nailed down dates and our chats kind of fizzled...until Leslie swooped in and started booking rooms and sending out the info.


As the weeks flew by, my nervousness about leaving began to grow. I’d never just up and left my kids with their dad for a weekend and right after that (in a momentary lapse of judgment cause Blacks don’t do these sorts of things) I had to leave for a week of camping and hiking with Outward Bound with my Northeast crew. Plus I was nervous about the distant since North Carolina is more than seven hours away. What would my family do without me (turns out...the same thing they do when I’m there)?


The night of the trip I stayed up until about 3am in the morning packing and tidying up the house. I only slept a good 2 hours and then Matt and I left out after Fajr so he could drop me off at my friend Melika’s house in West Philly. We also met up with Rugi who I hadn’t seen in a few years and we began our trip.


The best thing about road trips with your girls is the conversation (okay maybe this only pertains to us because my friends are so dope). We literally talked about EVERYTHING from politics, to religion, to education, to just existing and being Black Muslim Women. What makes the conversation so great is our diverse backgrounds. I realized after we got back that my friends literally are the African Diaspora in a nutshell. Rugi and Aisha are both African, Melika is from South America (the only English speaking country there...go figure), Leslie is from the Caribbean, and Aqeelah and I are both African American. Everyone was born Muslim except for Melika, Leslie and I, while Aqeelah’s family entered Islam through the Nation of Islam (there's a funny story about my ignorance on that when we first met...that may have to stay between us). Our friendship is a testament to the persistence and prayers of our ancestors. We’re their wildest dreams personified.


Our conversations lasted for hours and before we knew it, we’d arrived. Since our time was so short, we immediately began exploring everything that Wilmington had to offer. We had amazing food and picturesque views but perhaps the most important event of our trip was the time we spent on the beach. When we arrived on the beach, we set up shop amid some curious steers and frolicked in the water. I think it’s important to note here that we only discussed our mostly all white spaces only once and that was after we caught an older couple taking video of us in the ocean. We belonged there just as much as anyone else and it didn’t cross our mind once to shrink ourselves or dim our spirit because folks weren’t comfortable or used to us.


After we were done swimming, we had what I can only describe as a moment of zen. On the beach, surrounded by a sea of faces that looked nothing like our own, we poured our hopes and dreams into each other. We shared our difficulties and lowest points with each other. We talked about Allah...we reminisced...and then we did something that every woman should do at least once a year. We created short term and long term goals to share with each other so that we can be held accountable. Something so simple was also the most necessary. It was what everyone needed without knowing it was what we needed. I definitely cried a couple of times throughout the trip, but then again it doesn’t take much to make me cry.

Soon our time winded down and amid preliminary talks that we would be doing this again, we all parted our separate ways with lots of hugs and a few tears. My biggest take away from my Girl’s Trip is how necessary it was to my sanity and well being as a mother to be husband and kid free! I definitely came to the conclusion that it does not always have to be about the kids. My life isn’t over because I pushed four little watermelon head humans out and I certainly don’t have to put my goals on the back burner in order to always pour into them (thank you Aisha). Being among my girls, women who are successful, intelligent, creative, spiritual and fierce rejuvenated me in ways that I can’t describe. Perhaps these words might suffice:

We were light and we were love.
We were the stuff Black Girl Magic is made of.
Our conversations could’ve lit the way on a dark and stormy sea
While inspiring the most reluctant revolutionaries to fight valiantly.
We were sadness. We were hope. We were the wind so our dreams could float.

This blog is a manifestation of the motivation, encouragement, and love that my girls gave me. Their belief in me clarified so much and helped me to further define my purpose. Because of them, I plan to walk in that purpose...unafraid because I know that I’m not alone.

If you have never experienced a Girl’s Trip as a fully grown adult, start making plans to do so today and make sure you include a goals talk. It could be just what the doctor ordered.
On Community