My Father-In-Law Voted for Trump 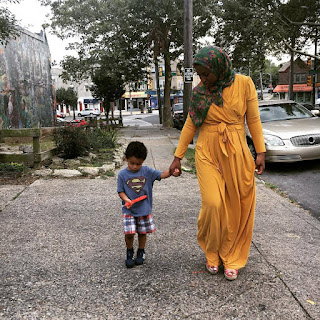 "I asked Pop-Pop, Did you vote for Trump?”

As our car moved closer to her south philly art school destination, I pondered that very question.

My husband and I have been together for almost 12 years and I’d be lying if I said we never talked about race. We do. It’s a part of the fabric of society and as an interracial couple with a multi-religious family, the topic comes up quite often. It’s a topic that I’m always more than willing to have with my husband because he gets it. All of it, without me having to explain why he should get IT. I think his boatloads of empathy has a lot to do with that.

In fact, I think empathy is what a lot of people do not have enough of and this becomes very problematic in a society that was developed by the systematic slaughter, theft, and forced labor of entire black and brown populations of people. Now that the most jarring physical manifestations of oppression are over (or at least that’s what they would have you believe), folks want to deny the affects that it had and continues to have on society.

What many in society fail to realize is that White supremacy doesn’t just affect Black people. It also infected Whites with an air of supremacy and superiority that many, even the most liberal, are slow to cure themselves of...so they deny that it’s a thing. They create illusions that the real problem is the Black and Brown people of society. This need for denial has led to an entire sector of White Americans who refuse to tune in to what every day non-White Americans experience. They are the kind who deny that racism still happens.

They are the kind that move to all White neighborhoods to escape Black and Browness and hide it under the guise of wanting to live crime free.They are the kind whose kids walk into a Walmart filled with more Latinos than they’d care to encounter and say, “Where are all the Americans?” These folks helped get Trump elected. They were the silent majority who said they’d go for Hillary and instead voted for Trump in private.

One of those within that silent majority happens to be my father-in-law and I found out because my nine year old daughter asked a question I never thought to ask.

Now some of you may be thinking, why does it matter who he voted for? Listen, it's not about Republican and Democrat here. I don't care about political parties one way or another. In fact, I don't even identify as a Democrat or Liberal. So, the issue isn't what party Trump is a part of, it's that Trump is a White Supremacist, plain and simple.

Trump has used disparaging, dog whistle remarks when discussing Black and Brown peoples. He continued the practice started by his family to not allow people of color to rent in his buildings. He's repeatedly advocated for putting Muslims on a registry and instituting a ban. Then, as the cherry on top, he named a White Supremacist, Bannon, to his cabinet.

This is dangerous for America, but this bodes even worse for the marginalized like my Black, Muslim, Interracial, Family. Will we be forced to sign up for a registry like Jews in Nazi Germany? If we refuse, will we be marched to internment camps like the Japanese? Will it be okay for a cop to shoot my eleven year old almost immediately after exiting the patrol car because he has a toy gun, or even rough him up, as Trump suggests?

A vote for Trump put my family in severe mortal risk. The fact that my father-in-law chose not to see that and willingly cast his vote for him in my opinion proves his lack of care and regard for myself and our family. So no, I'm not mad that he voted for a Republican. I'm mad that he voted for a White Supremacist in 2016, despite having a Black daughter-in-law, a White Muslim son, two Black grandsons, and two Black granddaughters.

Understandably so, when my daughter told me what her grandfather said and did, it made me extremely angry. Slowly my anger gave way to hurt and disbelief. My first thought was for us to cut him off immediately. However, as days passed by, both Matt and I decided that it was best for him to have a conversation about why his vote put our family’s Black Muslim lives in danger. We both decided that I needn’t be present for that conversation.

I’m actually glad that Matthew not only stepped up to the plate but understood that it wasn’t a dialogue I should even have to engage with in the first place. Honestly, it’s not our job as Black people to continue to convince folks who don’t even see you as equal, that racism exists and it’s a bad thing for all parties involved. While I'm certainly open to speaking with fellow educators who directly impact our children in schools, I don't think it's necessary for me to engage folks who live in closed off communities far removed from our realities.

And to be honest, I don’t think I’ll get any closure out of the conversation that is had so I’ve decided that I’m indefinitely taking a break from visiting with my in-laws unless they sign up for a subscription to Safety Pin Box and submit a four page review on Ava Duvernay's documentary, “The 13th.” I'm only half joking here.

Even if he doesn’t learn from this (cue the Tyra and Tiffany meme), and become more conscious of how dangerous political dogma tinged in racial codes can be, I've learned a very beneficial lesson. When people think of Hitler and the Nazis, they often times wax poetic about what they’d do had they been alive. Most would tell you they would have hid the the Jews and resisted the Nazi takeover. What my father-in-law's vote and indeed the rest of White America showed me is the results... had they been alive and in Germany during that time, things might not be all that different.

This election is a defining moment for our country, and while it may not have been the beginning of White Supremacy, we can work to make it the beginning of its end. However, that will rely mostly on what White Allies do from here on out. It's time to have these discussions in classrooms, in church, and indeed at the dinner table.
On Family