A Lesson in Perserverance and Confidence at MIST Philly 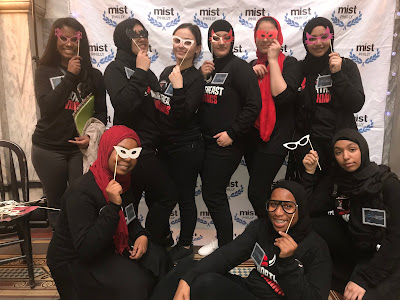 This weekend was the event that most of our students in MSA had been waiting for, MIST (Muslim Interscholastic Tournament) Philly! We have well over 25 students who decided to compete in several categories including, Improvisation, Qur'an, Spoken Word, and Debate. Unlike last year, our team also included some of our students who are not Muslim which I loved! The category I looked forward to the most, was probably Debate because that's the team I would've joined in high school if I didn't do track.

I’ve been able to judge debates and I assign them as activities in my classes. However, I've never had the opportunity to coach one. When the girls told me they were entering debate and they needed helped I was so excited but worried because I knew time was limited. I talked to the girls a few days later and gave them a run down about how things would go and how to prepare. Mind you, these girls are in high level programs at Northeast and involved in several clubs so we didn’t get as much practice time in as I would have like.

Nevertheless, MIST arrived. Alia Bukhowa our other MSA sponsor and I tried to whip them in to shape as best we could for the first day of competition in between competitions and workshops. They excelled and kept moving on until they made it to quarterfinals. 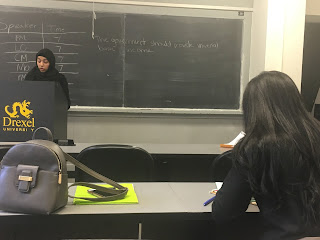 With each round, our girls took our critiques and the judges critiques to heart improving each and every time. They were able to cut down on saying Um, start to breathe more, and in addition, even out their pacing by slowing down. I was incredibly shocked at the rapid improvement over the course of a few hours. 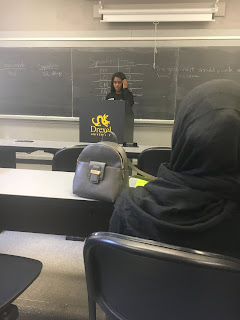 Finally, we got an update, they'd made it to semifinals to compete for third place! THIRD PLACE! They’ve never done debate but they were some of the most prepared kids in terms of evidence and determination! Mrs. Bukhowa and I made sure they were well versed in well over 6 - 8 topics they were expected to know and be prepared to argue for the government or opposition at a seconds notice.

So, here they are preparing for third place, hoping to grab a spot for MIST Nationals in New York. I think we all wanted to get Immigration because they'd worked so hard on putting together a great case.  We got the topic we wanted, Immigration. Now, we just needed to get Government. Though they were prepared for both sides, we had a smoking gun if we were chosen as Government they we wanted the girls to use. Well, unfortunately, they got tails and thus had to be the bad guys once again, and argue for the Opposing side. No biggie I thought, we go this!

So I'm nervously listening and watching them as the Government lays out their position. Soon, it's our turn and half of our team was in the audience to root them on! Our first speaker got up, stepped to the podium like she meant business and then preceded to.....ARGUE as if she was Government defending immigration. Nooooooooo! Be careful what you wish for, because the smoking gun that I'd wanted them to use if they had been chosen for government...well it was said anyway and of course the judges were impressed. The only issue is that, we were the Opposition! Turns out, she was confused about what side she was arguing and asked for clarification once she set down...but...alas the damage was done.

Now, I almost died when she began talking. I think I actually gasped, covered my eyes and wanted to run out of the room. The opposing team began talking and smirking while we were still at the podium and this may have hurt them. However, our first speaker, despite making a huge faux pas never wavered. She didn't get up and run from the room, she didn't cry, even though she later told me she wanted to! She didn't yell at me and the rest of our team (some of which got up and left) to stop being so dramatic, even though she wanted to (lesson learned for me because I'd given up any hope of them placing). Instead, she hunkered down, prepared her closing and helped our next speaker prepare her rebuttal.

Well, our second speaker recovered and hit them with more information. They brought up Remittances and Brain Drain, I don't think the other team even knew what those things meant. Then, Boom, our closer, the first speaker who messed up used her mistake as an attack against the government and drove home our point.

Listen, here's the best part! Those arguing for the Government’s position did not capitalize on the mistake and as a result our girls placed third! These young ladies learned a valuable lesson about persevering through mistakes and not giving up. These lessons will serve them into their college and professional careers, this I'm sure of. 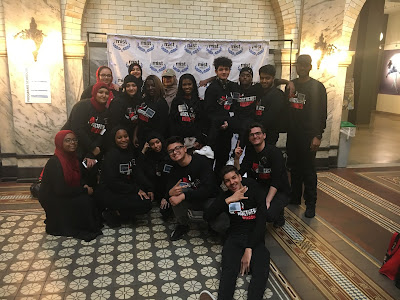 The icing on top? The rest of the team placed in several categories including 2D Art, Qur'an, Improv, Community Service, Nasheed, and Graphic Design. They worked hard and it truly showed in the results. The best part is that we're not done yet! We still have MIST Nationals to look forward to and I'm determined to help make that happen. All of our students, including my two debate All-Stars are full of resilience and I can’t wait to see how they change the world moving forward in life!
On Community