An Ode to Black Iftar Philly 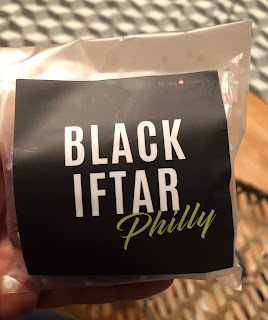 So, I haven't updated this space in months because I just haven't been in the writing mood. However, over the past few weeks I've found myself writing poetry, working on my book, and contemplating topics for a new blog. I wasn't sure what I wanted to write, but, thanks to Kameelah Rashad's Black Iftar Philly, held June 1st, I decided to write an Ode...of all things.

Before I share my Ode, let me back up and tell you why this iftar was so special. Firstly, this Ramadan, I didn't have the urge to go to community iftars because teaching IS exhausting and my anxiety as of late had been palpable.

But, when I saw the event pop up in my timeline last week, I really didn't think I had the capacity to go even though I knew it would be dope!

Fast forward to the day of, Allah gave me several signs that I needed to get it together and show up. The first was actually messaging with Kameelah, and the second was the fact that Matthew, who was also super tired actually saying he wanted to go too.

I'm still so thankful for Kameelah's text because the outing was exactly what I needed. It left me feeling satisfied, fulfilled, represented and stuffed! I also learned about the woman behind the movement, Samira Abderahman.

Samira started Black Iftar in order to curate a Ramadan iftar space that was authentically Black but welcoming to all people. Often times, non-Black Muslim spaces can be difficult to navigate and can end with frustration and anger due to the prejudice + racism Black Muslims experience from the larger Muslim community. So, B.M.I actually serves as a vision of what the ummah could be if all cultures were truly respected. As Samira explained her vision for the event, I instantly knew and understand why this was/is a necessity.


In addition, I enjoyed the camaraderie and the diversity that was in the room, because despite the negative chatter about the event, it was open to all those who wanted to attend! Not only was the event a showcase for Muslim artists, any proceeds will benefit the Black Muslim Psychology Conference which I've written about before.

So, inspired by the spoken word artists, Tariq Toure (@tariqtoure) and Sadiyah Bashir (@idabwellin), the decorations, and super mom Kameelah Rashad, here is my recap of the iftar in Ode form.

An Ode to Black Iftar Philly

So Black you smell the collard greens simmering over a low flame.

It is cornbread and fried chicken, you know, the cuisine that reminds you of the migration they call Great. That trek from southern cities that brought music, culture, and soul food to the unsalted North.

It is bean pies crafted and sold by bow tie wearing Black Muslims with an X in his name. The kind your momma bought near the zoo or Temple number 2.

It is home...because you don’t have to worry about whether you’re welcomed in that space. It is words of our sacrifice and our reversion given life as they freely flowed from the poet’s lips. 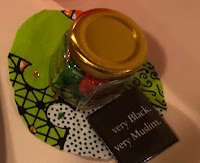 It is not exclusionary, it is evolutionary.

Plus, it is Hella Black.

So Black you don’t give the Kente cloth on the table a second thought because it belongs.

And the “Protect Black Women” mantra inked on a button was so Black all I could think about was Malcolm. Yeah, I was home.

So Black that the “Very Black...Very Muslim” button prompted my genetically biracial but Hella Black children to start singing “Say it loud, I’m Black and I’m proud” with fists in the air.

So Black that only a Black owned space with a creek full of geese could serve as its venue. The surroundings so picturesque and scenic it triggered my memories of southern dirt road summers and ponds where Uncle Chig taught us how to fish. 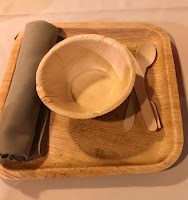 It is acting as sustainable stewards of the earth with place settings of biodegradable plates & utensils with textures of the rainforests and the motherland crafted into its design.

It was Hella Black.

So Black that you forgot for just a few moments in time that you were Black and living in an oppressive system where your skin has been weaponized.

So Black you could breathe.

So Black you could laugh.

So Black you could feel.

It was love. It was Joy. It was Magic. It was Muslim, It was Indigenous and African, at the same time. 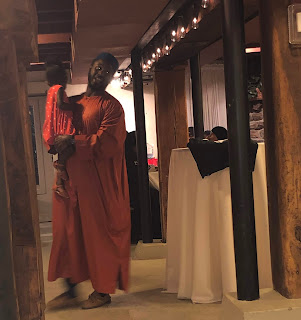 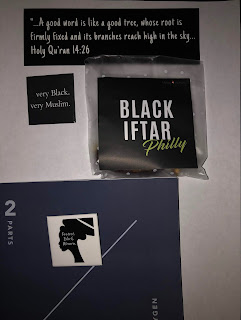